Towing "illegally parked" cars, motorcycles and other vehicles, impound them to a certain area and release them after payment of penalty -- I think P500 or P1,000 for motorcycles and P1,500 for cars -- is among the revenue sources of certain local government units (LGUs) as being done by almost all cities in Metro Manila.

Last Friday afternoon, around 3:25pm at the back of Skyland Tower, in front of Tiara Oriental Hotel, Malugay St., Makati, a man briefly left his motorcycle here to buy fishball or what. I don't think it was "illegally parked" as there were two other vehicles on that side of the building that was parked, but their drivers were inside.

Then a towing truck by the Makati City government came and three men immediately carried the motrcycle. The motorcycle driver or owner who was just a few meters away ran to protest and pulled his motorcycle down. 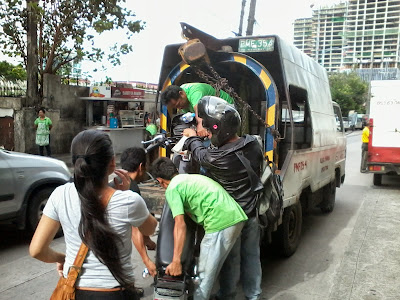 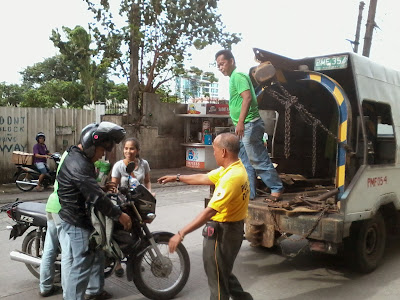 Here's the short video that I took. I did not get the name of the MAPSA officer who ordered taking the motorcycle. That big man in green later shouted at me and asked why I was taking the video. Not wanting to argue with goons like him, I said "Pang report ko po sa Rotary". He demanded, "Anong Rotary?" I said "Si Mayor Binay, Rotarian yon". "Sinong Major Binay?" was his angry reply. I repeated, "Si Mayor Binay!" and he kept silent. 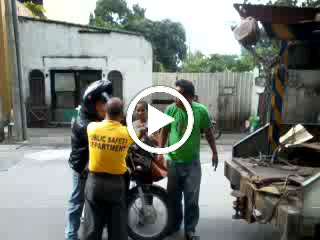 The smaller and thin man was insistent on taking the motorcycle. How much do they earn, their commission, for each impounded vehicle and motorcycle? I see greed in their faces often.

The woman was able to persuade the MAPSA officer to let go of their motorcycle. Maybe he was ashamed that many people were looking at him and the commotion that his team has created.

And a day before that, last Thursday, around 12:40pm, same area, at the back of Axa building in Malugay St., this car was being towed, possibly by the same truck. It's a vacant lot, no traffic congestion, no sign of "No Parking", only "One Way" sign is posted there. 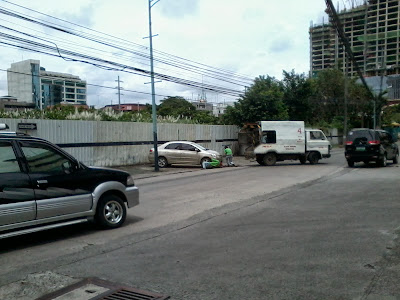 Woe unto the owner of those cars that are towed. The hand brake would normally loosen if not damaged. Also a brief emotional anguish on the car owner not finding his/her car on the slot it was parked, thinking that it was carnapped and stolen by some criminals. 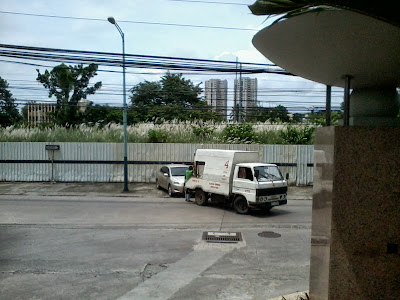