Two weeks ago, there was another good news in the health front from The Economist blog, that "Africa is experiencing some of the biggest falls in child mortality ever seen."

CHILD mortality in Africa has plummeted, belying the continent’s “hopeless” reputation. The chart below shows the change over the most recent five years in the number of deaths of children under five per 1,000 live births. It does so in 20 countries which have had demographic and health surveys (detailed surveys of living standards) since 2005. Sixteen of the 20 have seen falls, but the more impressive finding is the size of the decline in 12: more than the 4.4% annual fall needed for the world to achieve its millennium development goal of cutting by two-thirds the child-mortality rate between 1990 and 2015. The top performers, Senegal and Rwanda, now have rates the same as India. It took India 25 years to reduce its rate from around 120 child deaths per 1,000 births to 72 now. It took Rwanda and Senegal only about five years. Michael Clemens of the Centre for Global Development, a think-tank in Washington, DC, calls this “the biggest, best story in development”. 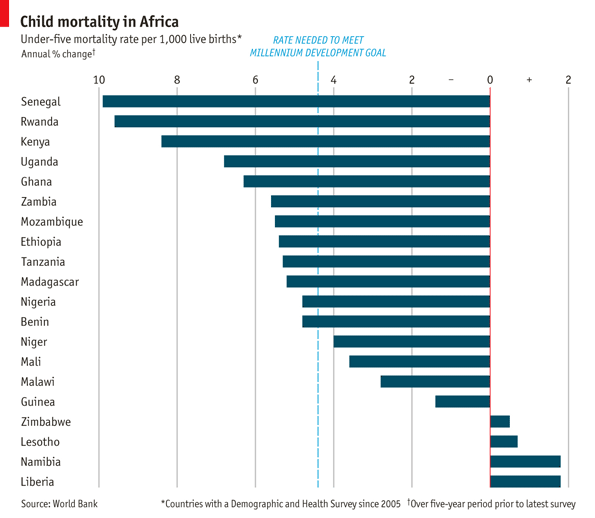 This is indeed good news. Make modern science and economic growth move to reduce child mortality and when those children become productive adults, they themselves will contribute to further improvement in modern science, economic growth and public health, especially in the area of infectious, non-communicable and tropical diseases.

Meanwhile, the World Health Assembly (WHA), a gathering of the Secretaries or Ministers of Health of WHO member-countries, has prioritized global vaccination.


25 MAY 2012 - Ministers of Health from 194 countries at the 65th World Health Assembly endorsed the Global Vaccine Action Plan (GVAP), a roadmap to prevent millions of deaths by 2020 through more equitable access to vaccines for people in all communities. In addition, Member States also designate the last week of April as World Immunization Week.

Thirty-eight speakers including country delegates, partners such as UNICEF and GAVI Alliance and civil society organizations took the floor in massive support of the GVAP....

I will just add that such global action is not and cannot be limited to government efforts alone. There are many civil society organizations (CSOs) like health NGOs, international civic groups like the tens of thousands of Rotary Clubs under Rotary International (RI), church groups, private charity foundations like the Bill and Melinda Gates Foundation, many others. 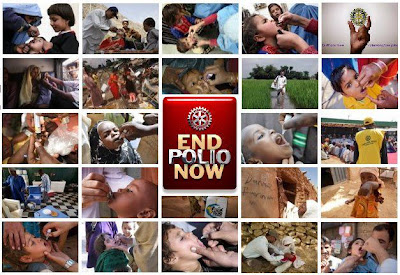 Take for instance RI's  "End Polio Now" campaign. The Gates Foundation will donate $355 million over a number of years to RI (about a third of it I think, has been released) and the latter matched it with a counterpart fund of $200 million. There is only one goal for this large mobilization of private resources and donation: to help end polio worldwide.

I also noted a vaccination project for children 4-6 years old by some Rotary Clubs three years ago,  Childcare 2: Rotary DTP Vaccination, May 24, 2009.

While espousing free market solutions to many public health problems, I recognize there is a role for government (hence, I am no anarchist in public health policy) in dealing especially with infectious, pediatric diseases.
---------