The territorial conflict in the West Philippine Sea (WPS) or the South China Sea (SCS) was exacerbated last week with the discovery of large-scale poaching of important marine resources by Chinese fishing boats off Scarborough Shoal, a small area just 124 nautical miles off Zambales province in the Philippines, and 500 nautical miles from Hainan island, the southernmost part of China. For a few days, there was a brief stand off between the respective boats of the Philippine Navy and Chinese Navy, then back to diplomatic discussions and negotiations.

The hawks among various sectors in the Philippines would use that incident as another reason to build up a "strong" fighting Philippine Navy and Air Force. Which means you and me must pay more taxes, both in the present and the future, to finance a large-scale modernization of the Armed Forces of the Philippines (AFP).

Last Friday, April 27, 2012, interaksyon.com launched a new project, the "Online Onsite" where some of the news portals' columnists would speak on various issues and the discussions will be tweeted. Twitter followers, as well as some of the network's reporters and walk-in audience can ask questions and the resource speakers will answer them. The event was held at the Enterprise Center, Ayala Avenue, Makati City. I was assigned by the editors to speak on the Scarborough Shoal incident and the rest of the WPS/SCS issue. My powerpoint where I based my informal talk is posted here,
http://interaksyon.com/assets/documents/interaksyon_online_onsite.pdfinteraksyon.com 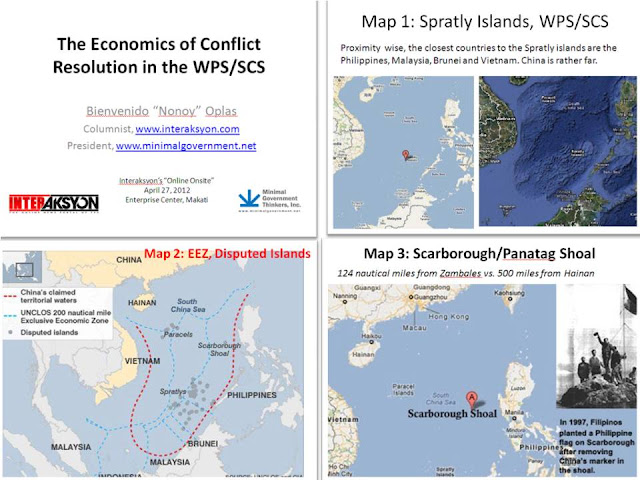 The maps above show that aside from questionable historical claims and military bullying, the China government really has very little or zero rationale in making its claim that the entire U-shape SCS area is its own territory. China is explicitly violating the UN Convention on the Law of the Seas (UNCLOS) and the Exclusive Economic Zones (EEZ) of other south-east Asian countries there. The China government therefore, is standing on a very week legal and diplomatic position, thus it shows military might. So the military option is a trap, a diversion, it moves the debate away from international diplomacy and multilateral negotiations into bargaining for US military support, into coercing taxpayers of respective countries to surrender more of their money, resources that they are supposed to spend for themselves and their households, to finance an expensive military adventure with zero or little chance of winning.

Below are two tables I showed, plus an estimate of how costly a military path would cost us. I thank a good friend, plane pilot and debater Sam Aherrera, for his ideas. So the verdict is very clear: a military and war path is an idiotic proposition that will impoverish us taxpayers and will benefit only a very few military and civilian rent seekers and their military suppliers. 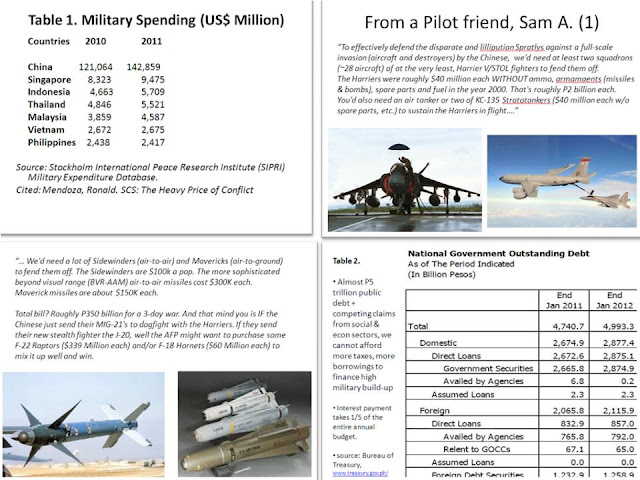 But government is coercion, right? Even if the local rent-seekers and war freaks, like the China government, stand on very weak legal and fiscal grounds, it is possible that they might still prevail. So I offer a second option: finance their large-scale armament build up by privatizing the AFP HQ in Camp Aguinaldo right here in Metro Manila. Another is to privatize the sprawling campus of the PMA.

I also outlined the various non-war options, and the various international arena where the Philippine government can pursue endlessly its diplomatic offensive. The China communist government does not like internationalizing the issue and pursuing multilateral talks because it realizes its weak diplomatic position. It wants bilateral negotiations where it can easily divert the issue into military bullying or other rent-seeking schemes that can favor some local political, business and military elites. 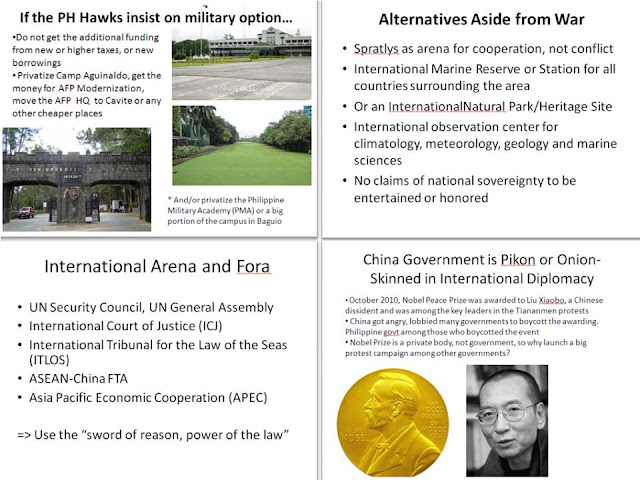 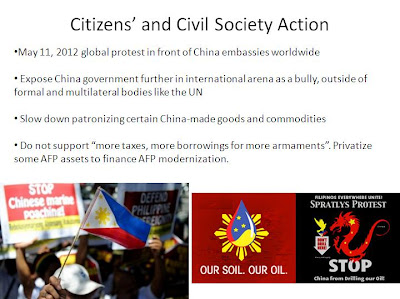 Towards the end of the interview and twitter notes during the Online Onsite,
I said that we pursue the diplomatic, international discussion of the issue. The Philippine government should pursue existing formal avenues like the various UN fora (Security Council, General Assembly, ITLOS, ICJ) and regional bodies like APEC and the ASEAN.

And us private citizens, civil society organizations (CSOs), can initiate some activities like the planned international protest action in front of China Embassies in many countries around the world this coming May 11.

The China one-party, zero opposition communist government, does not know how to effectively deal with ordinary civilians and CSOs. We operate on a different plane. We in CSOs work on purely voluntary exchange and action while governments work on coercion.

So to reiterate my position on this issue:

1. Philippine government via the DFA should pursue international diplomacy and multilateral negotiations, endlessly.

2. Civil society and private citizens can launch various activities, no central plan, no central bureaucracy, to expose and shame not only the China government bullying but also the local military rent-seekers.