This is another example of civil society organizations (CSOs) doing their share in community development; in this case, in making governments become more transparent, more open, via technology This is posted yesterday in interaksyon.com.
----------- 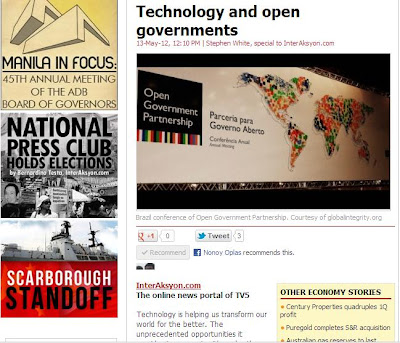 Technology is helping us transform our world for the better. The unpreced-ented opportunities it provides to connect with each other and with information easily and instantly is changing the way we communicate, how we do business and how we live our lives. By putting power in the hands of billions of consumers, prices have fallen and the choice and quality of goods and services have improved dramatically. Businesses, too, are gaining through the chance to know their customers better, strengthening relationships, building trust and increasing sales.

But while individuals as consumers are already reaping these benefits, as citizens they have yet to see the same improvements. Governments have often been slow to see the advantages that openness and dialogue brings for their countries. Some, to be frank, remain suspicious of the power it might hand to individuals and communities.

Slowly but surely we are seeing this change. Last year, we saw a small number of governments including the United States and the Philippines join together with citizens’ groups and businesses to promote openness and improved engagement with their citizens. The efforts of the Open Government Partnership were stepped up at a conference in Brasilia last month when 42 new countries joined. The meeting was attended by US Secretary of State Hillary Clinton and Philippines Budget Secretary Florencio B. Abad, who led discussions about how governments can use technology to improve their accountability to citizens.

The initiative is still in its early days. But by improving accountability and transparency, it has rich potential to improve public services, ensure money is spent wisely and break down the barriers between the government and the governed. At a time when this divide has never seemed bigger in many countries and when public finances are tight, these are goals of crucial importance.

Countries that sign up to the partnership have to demonstrate their commitment to open government. Each will set out this week their plans on how more information will be made available to citizens, how genuine engagement will be encouraged and how this dialogue will help drive social change.

Having seen first-hand what can be achieved if we can better connect people, I am excited by its potential to deliver positive change. The global success of eBay – the world’s on-line market place which now has over 220 million customers - was based on confidence in people and creating a network to enable them to come together. Consumers have gained from sharing their passions and interests. Many thousands of new businesses have been able to compete on a level playing field, challenging the dominance of established players.

Technology gives us, on a scale and speed never possible before, the opportunity to magnify the power of every individual. There will always be a tiny minority who might abuse this opportunity. But our experience at eBay is that the overwhelming majority use this power responsibly. We must have the confidence to harness this ability to give people a voice. If we do, the rewards will be enormous.

Governments which tap into the collective expertise and experience of their citizens will make better decisions. Increased transparency, participation and accountability will increase protection against corruption.

By using technology to empower individuals, we enable them to influence policies and priorities at a national and community level. It raises ambitions and increases interest and participation in public life.

But using the opportunities that technology brings to share information is only one half of the equation. We will only reap fully all these rewards if citizens, civil society and businesses use this information to monitor progress, hold those making decisions to account and to encourage change. Transparency is vital but so is the active engagement and participation of citizens.

It is vitally important, too, that we work at both a national and local level to help provide the skills and tools to use this data and the opportunities it brings to make a positive impact on lives and communities. This means developing the tools and partnerships which make this new era of active citizen engagement a reality. It is something Omidyar Network, which encourages the use of technology and markets to foster social change, is already supporting in many countries. 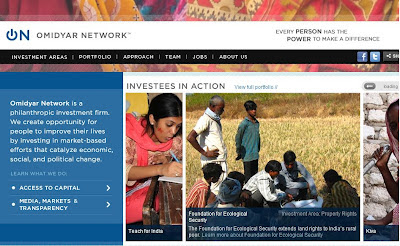 We are already seeing examples of what can be achieved and the difference it can make. In the Philippines, Omidyar Network is providing support to checkmyshool.org, a website that provides parents with independently sourced information about the quality of public schools.

But this is only the beginning. The ability to encourage honest and responsive governments and to allow citizens and communities to shape rather than just accept the services they receive holds great potential. We have seen a revolution in the way businesses and consumers interact. If we can harness the same power to improve standards of governance, we can help create jobs, strengthen societies and transform the quality of life of millions of people.