After posting Fat-Free Econ 9: Drug Pricing Bureaucracy is Not Cool below, a physician friend who requested anonymity gave me some leads about Cong. Ferjenel Biron, and Sen. Manny Villar. Some info why they push for more government, bigger government, drug pricing. There is possible conflict of interest among legislators who are pushing for the creation of a new bureaucracy, the Drug Price Regulation (or Regulatory) Board, DPRB.

I am not sure, I have not read, if Sen. Villar disclosed that his brother, Virgilio B. Villar, is one of the incorporators of Seville Pharmaceuticals, Inc., and was a former countrymanager of B. Braun. I have nothing against these companies as more players means more choices for consumers. I am only curious about  personal disclosure by government officials when they propose certain legislations that may benefit their kin and/or friends.

I am also not sure if Cong. Biron publicly admitted that he owns PharmaWealth and Botikang Pinoy, two  local pharma companies. Here are two stories about these two companies.
-------- 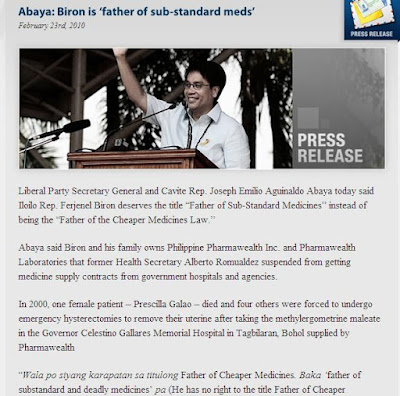 
In 2000, one female patient – Prescilla Galao – died and four others were forced to undergo emergency hysterectomies to remove their uterine after taking the methylergometrine maleate in the Governor Celestino Gallares Memorial Hospital in Tagbilaran, Bohol supplied by Pharmawealth


Doctors of public hospitals in Iloilo, Negros Occidental, Antique and Rizal, and regional officials of DOH and the Bureau of Food and Drug (BFAD) in Cagayan de Oro City, Davao City, and Guimaras have complained also against substandard medicines supplied by Biron and Pharmawealth such as aminophylline injections, epinephrine, hydrocortisone sodium succinate, nifedipine, metronidazole, among others.


In March 2003, the DOH through Health Undersecretary Alexander Padilla took Pharmawealth to notice as its medicines being supplied to public hospitals again failed sterility tests conducted by the BFAD.


“How can that congressman claim being the father of cheaper medicines when all he did in his business was to supply substandard medicines,” Abaya asked. 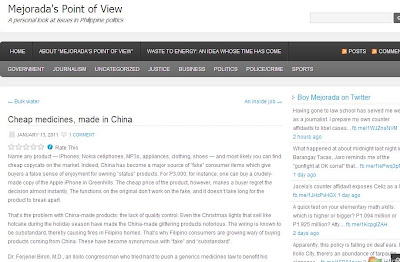 ... Dr. Ferjenel Biron, M.D., an Iloilo congressman who tried hard to push a generics medicines law to benefit his pharmaceuticals business, is bringing to the country dirt-cheap medicines from China in the manner of the 168 Mall, to borrow the words of business columnist Vic Agustin (“Cocktales” in Manila Standard-Today). The 168 Mall is that super store located in Divisoria where Chinese is spoken side by side with Tagalog. This is where a shopper can hunt for cheap products from China, where you can haggle with the vendor to get the lowest price. That Vic Agustin would compare Biron’s new venture, “Botikang Pinoy,” to the 168 Mall already gives us the chills.


Biron has opened several branches of his new pharmacy chain in strategic locations near major hospitals in Manila. The stores, structured as “wholly Filipno owned”, is really a partnership with two China pharmaceutical manufacturers, Zhangjiakou Dongfang Pharmaceuticals Co. and Shanxi Nuocheng Pharmaceuticals Co. “Botikang Pinoy” is so deceptively branded to give consumers no clue that the cheap medicines they buy are actually made in China. The company’s president, Dr. Luz Suplico-Jeong, is a sister of former Vice Governor Rolex T. Suplico.


This should be a cause for worry for Filipino consumers because Biron has a track record of selling substandard drugs and medicines. In the past, his Philippine Pharmawealth was sanctioned by the Department of Health for failure to meet standards imposed by the agency on drug quality. Deaths attributed to the use of his injectables have been documented in the Eastern Visayas. Without fear of contradiction, I can say that Biron isn’t exactly a paragon for selling quality drugs. The words “fake” and “substandard” are closely associated with his product line.


It’s not for me to say that these two companies don’t meet international standards for drugs and medicines. That’s the job of the Department of Health. What I’m saying is that if it’s happened in the past, what will now protect the unsuspecting buyer of medicines from being given “fake” and “substandard” products? Biron will have to show that all the medicines sold on his shelves have been inspected and green-lighted by the Bureau of Food and Drugs (BFAD). As almost all his products are imported, government will also have to make sure the correct taxes and duties are paid. Sources tell me that Biron’s expertise is importing medicines at a cost of say, P1.00 per tablet, and then selling them at P30-50 per tablet. No sweat.


Biron made his fortune as a pioneer in importing Indian-manufactured pharmaceuticals in the middle 90s. It appears he has found a cheaper source: China. But painful lessons — the loss of lives due to his substandard medicines is certainly painful — have to be made. From what I know, the Chinese vendors on 168 Mall or the like don’t issue warranties on their products. If you find a product defective, just bring it back to them and they will replace it, no questions asked. That’s because repairing it will cost just about the same as a new unit. That’s the reason they don’t really care about quality control.


This, however, can’t be done in the case of medicines. Once ingested, there’s no way of getting it out a patient’s body, and replacing it with a full-potency drug.
--------

Meanwhile, I am curious how certain pharma companies close to, or being owned by, price control bureaucrats, would benefit if the proposed DPRB bill become a law. Here are two scenarios that I can think off, I do not know if this makes sense.

1. The price regulation bureaucrats will decimate if not kill those pharma companies that directly compete with their products by declaring their drug products under big price control, hoping these competing companies will exit the market. Or

2. Force these competing companies to bend their knees before the price control bureaucrats, and the companies owned or controlled by the bureaucrats will take over these competitors via full or partial acquisition.

I hope readers can help if the above scenario makes sense or not, and why.
-------