Later today or tomorrow, the Senators will vote whether to convict or acquit the Chief Justice of the Supreme Court. I am posting some comments below from some of my friends (all from UP), posted in their facebook walls. Entertaining and educational at the same time.  Here they go. 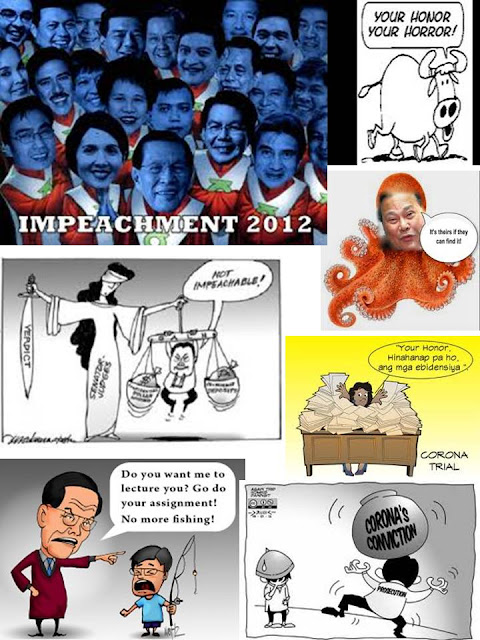 (1) From my engineer-economist friend, Ms. C.

This is not meant to be my definitive comment on the Impeachment Case, cause I think we, as a nation should abide with what the Senate decides. Follow the rule of law, and the consitution. If you don't agree with the verdict, don't vote for the senators who voted against your interest.

But this is an illustration of how NOT to be a text spammer, and how SMS is not the best means to spread propaganda, as the result may be the opposite of what you intended.

An Unknown number (UNK) sends me the following SMS:

ME: Sino ito? I happen to think that Corona should be impeached! Kaya tumigil kayo sa spam texting.

Ang point ko lang, is if you want to get PR points, you should have a ready reply, something diplomatic along the lines of "I'm sorry that you don't have the same opinion, but thanks for your feedback" would have been much better.

FROM WHERE I SIT: The prosecution has its task cut out for them; in its closing argument, it should convince enough of the undecided Senators to vote for conviction and not simply abstain because an abstention is equivalent to a vote to acquit if one or enough abstentions result in a failure to get 16 votes. All the respondent needs is 8 votes and he retains the office.

The number, for historical purposes, is 16 and 8. If the Chief Justice gets a total of 8 votes, whether to acquit or to abstain, he wins. If he gets less than 8 votes to acquit but gets enough abstentions to prevent 16 votes for conviction, he also wins.

For those wanting to follow the numbers. Here they are:

Why is this impt: the 15th vote to convict once achieved will tilt the scale. So do your analysis from this order....

After 41 days, my sense is there are 3 hard votes for acquittal: Santiago, Arroyo and Marcos. There are 5 hard votes for conviction, and they are all LP: Drilon, Guingona, Recto, Pangilinan and Osmena. There is a swing bloc composed of the leadership positions: JPE, Estrada, Sotto, Honasan, I see Revilla voting in this bloc bec of JPE. Then you have to make 2 columns: leaning towards A and leaning towards C. Watch their body language today during the closing and the kind of questions they will ask.

Not evidence per se but triggers a presumption, i.e. if a public officer's income is not commensurate with his emoluments, he has the burden to explain...

With Corona's admission of $2.4Million undeclared in his SALN, he has has assured himself of a conviction. Who will be next CJ? Hope P Noy considers a genuine intellectual this time around. Probaly from the academe?

Am not in the mood to make any commentary now on this issue. Will do it tomorrow. I have posted my earlier comments on this subject though: