Yesterday, March 08, 2012, was the 113th birthday of Friedrich Hayek, the Austrian economist and legal/political philosopher known for his work in defending individual liberty, free market and the rule of law.

Below are some quotes I got from his book, The Constitution of Liberty.

The individual has little reason to fear any general laws which the majority may pass, but he has much reason to fear the rulers it may put over him to implement its directions. It is not the power which democratic assemblies can effectively wield but the powers which they hand over to the administrators charged with the achievement of particular goals that constitute the danger to individual freedom today... The most enthusiastic supporters of such unlimited powers of the majority are often those very administrators who know best that, once such powers are assumed, it will be they and not the majority who will in fact exercise them. 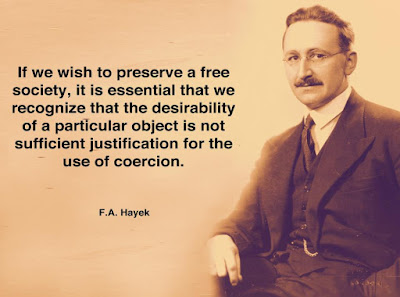 Law in its ideal form might be described as a ‘once-and-for-all’ command that is directed to unknown people and that is abstracted from all particular circumstances of time and place and refers only to such conditions as may occur anywhere and at any time…. “By ‘law’ we mean the general rules that apply equally to everybody… As a true law should not name any particulars, so it should especially not single out any specific persons or group of persons.

Even general, abstract rules, equally applicable to all, may possibly constitute restrictions on liberty. But this is unlikely. The chief safeguard is that the rules must apply to those who lay them down and those who apply—that is, to the government as well as the governed – and that nobody has the power to grant exceptions.

The ‘law’ that is a specific command, an order that is called a ‘law’ merely because it emanates from the legislative body, is the chief instrument of oppression. The confusion of these two conceptions of law (general rules vs. legislative law) and the loss of the belief that laws can rule, that men in laying down and enforcing laws in the former sense are not enforcing their will, are among the chief causes of the decline of liberty. 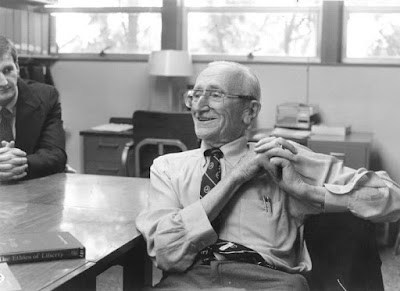 Not every enactment of the legislative authority is a law…only a very small proportion are substantive laws regulating the relations between private persons or between such persons and the state. The great majority of the so-called laws are rather instructions issued by the state to its servants.

That any law should apply equally to all. General and equal laws provide the most effective protection against infringement of individual liberty. It is this fact that all rules apply equally to all, including those who govern, which makes it improbable that any oppressive rules will be adopted.

Under the rule of law the private citizen and his property are not an object of administration by the government, not a means to be used for its purposes. It is only when the administration interferes with the private sphere of the citizen that the problem of discretion becomes relevant to us…. What distinguishes a free from an unfree society is that in the former each individual has a recognized private sphere clearly distinct from the public sphere, and the private individual cannot be ordered about but is expected to obey the rules which are equally applicable to all.

Below is a short article written by the President of Cato Institute, Mr. David Boaz.
http://www.cato-at-liberty.org/happy-birthday-f-a-hayek/


Posted by David Boaz
Today is the 113th anniversary of the birth of F. A. Hayek, perhaps the most subtle social thinker of the 20th century.

He was awarded the Nobel Prize in Economics in 1974. He met with President Reagan at the White House, and Margaret Thatcher bangedThe Constitution of Liberty on the table at Conservative headquarters and declared “This is what we believe.” Milton Friedman described him as “the most important social thinker of the 20th century,” and Lawrence H. Summers called him the author of “the single most important thing to learn from an economics course today.”
He is the hero of The Commanding Heights, the book and PBS series by Daniel Yergin and Joseph Stanislaw. His most popular book, The Road to Serfdom, has never gone out of print and sold 125,000 copies last year. John Cassidy wrote in the New Yorker that “on the biggest issue of all, the vitality of capitalism, he was vindicated to such an extent that it is hardly an exaggeration to refer to the 20th century as the Hayek century.”
Last year the Cato Institute invited Bruce Caldwell, Richard Epstein, and George Soros to discuss the new edition of The Constitution of Liberty, edited by Ronald Hamowy. In a report on that session, I concluded:

Hayek was not just an economist. He also published impressive works on political theory and psychology.
He’s like Marx, only right.