Corona Trial 4: Walkout at the Senate

(Note: original title of this paper was "Rule of Law 16: CJ Corona Appearance and Trial at the Senate")

I was hooked on twitter this afternoon, on the appearance for the first time of Chief Justice Corona at his impeachment trial at the Senate. Sooooo many tweets. Anyway, here are my own tweets. 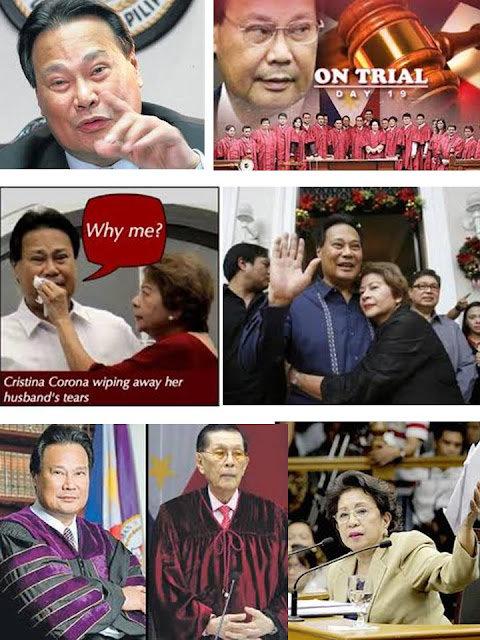 Telling the truth should not be stressful; it's when you say things other than the truth when you get stressed
Retweeted by Nonoy Oplas
Nonoy Oplas ‏@Noysky
Corona's theme song: "I want to break free" Prosecution's song: "Ma-ma-ma-My Corona" Enrile's Song: "I want it all:"


More songs by Corona at the Senate: "Breakthrough", "Dont stop me now", "Drowse", "It's a hard life", "I go crazy" (all by The Queen)
Enrile's songs for Corona (all from d Queen): Action this day, Bring back that Leroy Brown, Don't lose your head, Don't try suicide.

Defense' songs for Corona, all fr Queen: Hang on in there, Im going slightly mad, Keep yourself alive, Loser in the end, The show must go on
Mrs. Corona's songs to CJ, fr the Queen: Fun it, Lost opportunity, Play the game, These are the days of our lives, Who needs you? You and I.
-------