The leader and chief ideologue of CORRECT Movement, Orion Perez, keeps pushing and glorifying the Parliamentary form of government, even to skeptics of any form of government like me. Among the reasons he gave are that parliamentary governments outperform the presidential and other forms of governments, in (a) Economic Freedom Index ranking and in (b) Least Corrupt Countries around the world. Here are their tables. 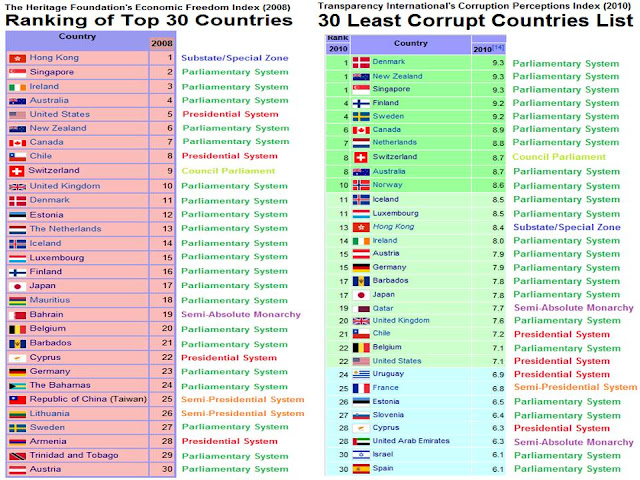 Ergo, to move from the current Presidential form to Parliamentary form of government for the Philippines will help make the country more politically stable, more economically free, and more accountable or less corrupt. Cute formulations, but I don't buy it.

See three tables below, just among other reasons why I do not want to endorse any form of government -- which Orion believes is wrong, that one MUST believe and endorse their parliamentarism hard sell, otherwise, one knows nothing, one is "myopic" (repeated several times) because they "have done extremely intensive and extensive research and we've found - based on the hundreds of pages of international PhD-authored dissertations we've gathered - what are the "best of breed" solutions for the 3 main aspects of the Philippines".


According to his warp logic, if one is still not convinced of the beauty and desirability of parliamentarism despite the voluminous arguments and tables that he has presented, one is "defeated". So his inflated ego declared that he has "defeated" me.

Really? And they have done intensive and extensive research leading to glorification of parliamentarism? 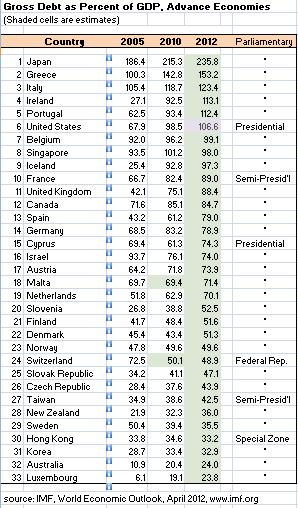 Among the most indebted, the most fiscally irresponsible, the most debt-addict and tax-hungry economies and governments around the world are the parliamentary ones.  Why can't these governments learn to live within their means, to stop glorifying forced equality and very costly welfarism, that resulted in such heavy indebtedness?

Ok, being indebted is not wrong per se, especially if one's debt is within "manageable levels", say below 30 percent or even below 50 percent of GDP. Assuming that we accept this argument, just look at those countries with gross debt 50 percent or higher of GDP, from Denmark upwards. Are these desirable figures or a glorifiable situation? I say No.

Some parliamentary fanatics can argue, so what if it's 100 percent or higher, so long as the people are satisfied or are being taken cared of by the government? I hope that no self-respecting free marketers will argue that way because that is clearly an apologetic position in favor of BIG governments.

High public debt correlates, though not perfectly, with rising economic instability, such as high or rising unemployment rates. 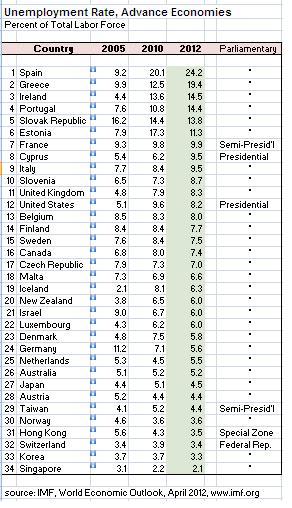 Fiscal irresponsibility, along with personal irresponsibility, is wrong. The economies that lead in the on-going global debt uncertainty, the PIGS (Portugal, Ireland, Greece, Spain) are all under parliamentary governments . The form of government, parliamentary or presidential or what have you, are less important than pushing the philosophy of more individual freedom and more personal responsibility, more voluntary exchange and more civil society involvement in running people's own lives. It is not just pushing for small or minimal government per se that parliamentary fanatics like Orion Perez think, is the main consideration for my agnosticism and non-admiration of parliamentarism hard sell, or even its opposite, presidentialism hard sell.

Here's another table, who are the most tax-hungry countries among the developed world plus a few South East Asian economies. High taxes is an indirect statement of the government officials and bureaucrats, whether presidential or parliamentary or communist or monarchy or what have you, that they can spend the people's money better and "more wisely" than the people themselves. This is from the annual study, WB-IFC's "Doing Business 2012 Report". 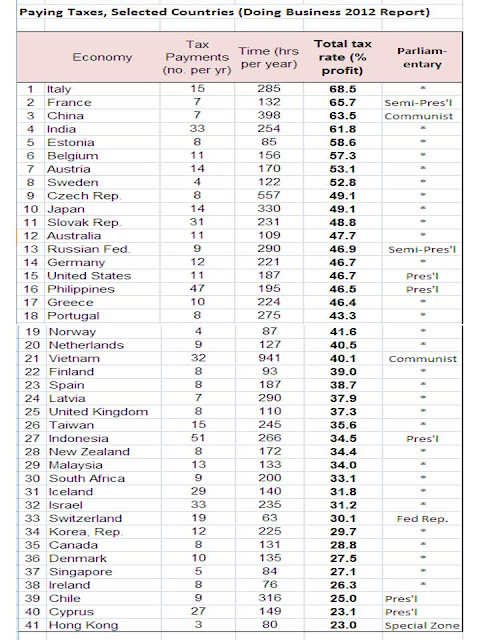 Parliamentary fanatics like Orion Perez would possibly be hiding this type of data to their followers. They only show tables where the parliamentary governments lead in the "Economic Freedom" and "Least Corrupt" ranking. True, but the same governments also lead in the most fiscally irresponsible, the most debt-addict, the most number of jobless people relative to their total labor force, the most tax-hungry. And soon, the most unstable economically due to these and many other social and economic factors.

Again, by criticizing this negative aspect of those parliamentary governments, this is not to glorify the non-parliamentary type of governments like those under the Presidential form. I have argued repeatedly in the past in this blog that the main role of the government is to promulgate the rule of law and protect private property rights, not expanding welfarism, indebtedness, tax-hungriness and personal irresponsibility.

This is an indicator of an intolerant mind and small-scale dictator and cultist, possibly aspiring to become a large-scale dictator someday in a parliamentary government that they push so heavily.

-------------
See also:
Pol. Ideology 28: Parliamentarism Hard Sell and Free Market Deception, April 30, 2012.
That's where my recent debate with Orion started, although we have debated several times in the past. That paper also gives links to my previous articles on Political Ideology.

1. His arguments revolve around his "parliamentarism is superior to presidentialism" lunacy. The fallacy committed: “correlation does not imply causation” fallacy. --- http://fvdb.wordpress.com/2011/09/01/faux-rey-refran-the-sinister-sockpuppet-of-a-pro-parliamentary-dum-dum/

4. He is pro-regulation statist. He doesn't understand the BIG difference between the rights-protecting role of government and regulations. A challenge to Orion: Kindly give examples of "cheating" that requires the passage of regulatory laws. http://fvdb.wordpress.com/2012/01/30/competition-is-good-regulation-is-evil/

6. He doesn't understand the BIG difference between political system and form of government. This is actually the source of his/their IDIOCY. http://fvdb.wordpress.com/2011/06/02/its-the-political-system-stupid/

8. He's got this pathetic habit of appealing to authority. That means he's incapable of forming his own independent thought and judgment. What's funny is- and it seems he's not aware of this- most of those authorities he cited are leftists, liberals or welfare statists like Fareed Zakaria, Riggs, etc. http://fvdb.wordpress.com/2011/08/22/fareed-zakarias-parliamentary-drivel/

9. He doesn't have enough brain cells to understand that it's the nation's political system and basic constitutional principles that can make or break a society. A pro-capitalist, pro-freedom POLITICAL SYSTEM requires a FORM OF GOVERNMENT (which should be presidential) that supports the concept and principles of 1) minimal government, 2) free market system, 3) objective rule of law, and 4) individualist concept of rights.

Are these what Orion call "defamatory"? To Orion, it's "defamatory" if you objectively criticize his parliamentary idiocy. Who the heck is this guy to accuse anyone who criticizes his INCORRECT movement of DEFAMATION? He doesn't even know the legal meaning of "defamation".

Hi Marita, one of the disgruntled CORRECT members I personally don't know, nor my friend in facebook, is lurking there and passes me some of his observations about Dumdum. His term, that movement is "being run like a cult" revolving around Orion.

As I said in "Probing a Megalomaniac's Mind", let us allow people to self-destruct. So I allow them, like Dumdum, to open their mouth more to show their insecurity and shallowness.

This fantastic post was very nicely written, and it also incorporates many good facts. I appreciated your skilled means of writing the post. You have made it simple for me to understand. Good and precise info.