Climate Tricks 7: On a "New Ice Age" and Temperature Cheating

After a wet and cloudy March, April this year here in Metro Manila and surrounding provinces was generally hot and often cloudless. There were about three days of cloudy sky, it even rained once. Now the 1st day of May is generally cloudy, dark actually this afternoon. The moth have appeared last night in some places, one of nature's early signs that the rainy season is coming soon. So what happens now, out of supposedly seven months of "dry" season (November to May), we shall have only one month of dry and hot month, last April? Terrible global warming indeed.

I am posting portions of four articles from four climate and scientific blogs that I follow regularly. You'll enjoy them. Cheers.
----------------

By P Gosselin on 27. April 2012
Someone forgot to tell the Russians that natural climate factors no longer count for anything, and that from the 20th century on man-made CO2 is the sole driver of the climate – now making the Earth only warmer and warmer.

Lake Vostok under almost 4000 meters of ice in Antarctica. Source: US Government.
The German edition of Russian online daily Ria Novosti here writes how a team of Russian scientists in Antarctica has reached Lake Vostok, isolated from the rest of the world by a massive ice sheet for over 15 million years. A team of Russian scientists bored through 4000 meters of ice to reach the lake on 5 February 2012....
(2) From WUWT,
http://wattsupwiththat.com/2012/04/30/a-tale-of-two-altitudes-how-stratospheric-temperature-is-de-coupled-from-the-surface-temperatures/#more-62378


A Tale of Two Altitudes: how stratospheric temperature is de-coupled from the surface temperatures

Posted on April 30, 2012 by Anthony Watts
On the battle between Arrhenius and Ångström.
Story submitted by John Kehr, The Inconvenient Skeptic
Any serious discussion about the Theory of Global Warming will eventually include the absorption band argument that started more than 100 years ago between Arrhenius and Ångström.  One of the arguments presented by Ångström was that the main CO2absorption band is between 14-16 micron and that band is also absorbed by water vapor (which is correct).  The counter to this by Arrhenius was that it didn’t matter in the upper atmosphere where there was no water vapor.  Of course none of this matters because radiative heat transfer is only 20% of the energy transferred to the atmosphere, but that is generally ignored by both sides of the argument.
At the time there was no way to measure the temperature in the upper atmosphere so there was no way to determine what was going on there, but of course now there are many ways to measure the temperature there.  When I started looking at the annual temperature behavior of the stratosphere and the top of the troposphere I found something very interesting that is as usual, bad for the warmists.
Here is the average daily temperature of the troposphere (at ~4.2 km) and the stratosphere (41 km).

What makes this so interesting is that they are completely out of phase with each other.... 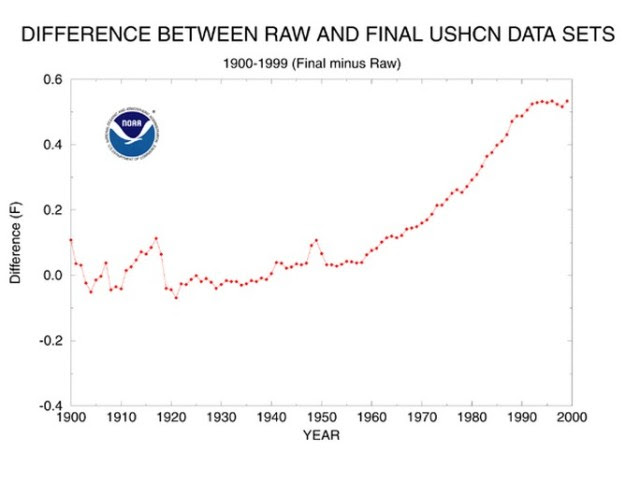 http://www.ncdc.noaa.gov/img/climate/research/ushcn/ts.ushcn_anom25_diffs_urb-raw_pg.gif
The entire trend is due to NOAA and GISS manipulating the temperature record. There was no warming in the US before GISS/NOAA started cheating in the year 2000.

A Disturbing Trend In Atmospheric CO2


New Evidence Our Record Warm March was Not from Global Warming

As part of my exploration of different surface temperature datasets, I’m examining the relationship between average U.S. temperatures and other weather variables in NOAA’s Integrated Surface Hourly (ISH) dataset. (I think I might have mistakenly called it “International” before, instead of “Integrated” Surface Hourly).
Anyway , one of the things that popped out of my analysis is related to our record warm March this year (2012). Connecting such an event to “global warming” would require either lazy thinking, jumping to conclusions, or evidence that the warmth was not caused by persistent southerly flow over an unusually large area for that time of year.
The U.S. is a pretty small place (about 2% of the Earth), and so a single high or low pressure area can cover most of the country. For example, if unusually persistent southerly flow sets up all month over most of the country, there will be unusual warmth. In that case we are talking about “weather”, not “climate change”.
Why do I say that? Because one of the basic concepts you learn in meteorology is “mass continuity”. If there is persistent and widespread southerly flow over the U.S., there must be (by mass continuity) the same amount of northerly flow elsewhere at the same latitude.
That means that our unusual warmth is matched by unusual coolness someplace else.
Well, guess what? It turns out that our record warm March was ALSO a record for southerly flow, averaged over the U.S. This is shown in the next plot, which comes from about 250 weather stations distributed across the Lower 48 (click for large version; heavy line is trailing 12 month average):