Corona Trial 5: Walk out from the Senate, Walk in to the Hospital

Here's a guest post from a fellow UP alumni, Jack. He wrote this last night, or a few hours after the Corona walkout drama at the senate. Good humor and nice insights. 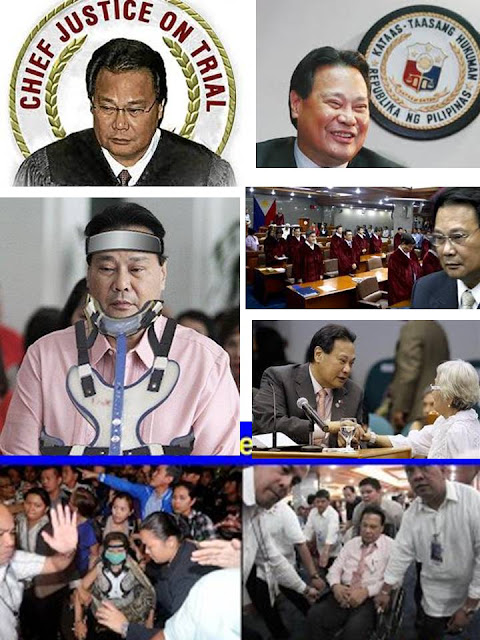 I like the points Corona made. I learned so much today from him and his testimony. Some parts confused me a bit so I may need good old Gary O to enlighten us on our confusion.

Points that proved interesting in his "Opening (and Maybe already his Closing) Statement:

1. He does have dollar accounts.

I thought you would still have only S10,000 plus the accumulated interest right? I think the CJ thought that mathematically, because of the devaluations, the dollar amount would also balloon. Maybe I failed some of my Eco subjects. Tere, help! UPSEAA Economists, help us in understanding this please. )

3. I found it also a great revelation that Dollar Accounts, basing on CJ's testimony SHOULD NOT be declared in the SALN. Why? Because he says this is covered by the bank secrecy law. I thought that the SALN meant you had to add all your cash whether it is in dollars, renminbi, yen, pesos rupee, zlotys or whatever. total that and put its equivalent peso value in the Assets column of the SALN. But then, I could be wrong kasi retired na ako from the Department of Agriculture many many years ago. Maybe they changed the rules somewhere.

3a. I found his reasons for not declaring it also interesting. Declaring such dollar accounts would be a VIOLATION of the Foreign Currency Secrecy Law so being the Chief Justice, he did not WANT TO BREAK THE LAW. (Don't you just love it!) Interestingly, when he entered government, he didn't declare it. Sayang, if he did so nobody would be asking him anything now.

3b. His second reason was even more interesting. He didn't declare it because everyone doesn't declare it. Just to prove this point, he challenged all 188 congressmen who signed the impeachment complaint and Senator Drilon to sign their own similar waivers. simultaneously with him. Or else, he said, I am not a fool and not being a fool, no waivers from them, no waivers from me. I love it. Its like games we used to play as kids. If caught in a bind, just stick out your tongue and say to everyone.... belat! Or could we say he even turned Biblical as he seemed to be paraphrasing John 8:7 from the Bible "let he who is without sin cast the first stone."

4, As early as 4 pm, his strategy was unfolding as clear as day. Just ramble on with his "opening (and maybe even closing) statement", let things drag on and delay and delay and delay so no one can ask questions. I think what many pundits expected him to do was after three hours of rambling statements, say Whew!, that was hard on my health. Could we just postpone till tomorrow, then rush to the hospital and the next day wear a neck brace and sit on a wheel chair and says, oops. I can't go and testify! What no one expected was that he would walk out slowly, premeditatedly, actually still looking really healthy, try to rush to his vehicle and then when stopped by the Sgt. at Arms' people, suddenly develop low sugar levels and return in a wheelchair looking like he got the short end of the stick from Claudine Barreto and Raymart Santiago.

5. Re Basa Guidote, in one breath, he says it is a family feud and yes, he did admit that his wife and his daughter managed to get ownership of the corporation for P28,000 which he says is much more that the original incorporation value of P21,000 (even though the value of the corporation is P34 million). Again somewhere, I got lost here. He says that Carla, his daughter is the owner of Basa Guidote. But, the funds are in Renato Corona's peso accounts. In one breath, he says, he and his daughter are different entities because if they were the same, then the sale of Cristina to Carla does not count and is a fraudulent sale. Then in the next breath, he admits they are in his peso account. Also, shouldn't the right entry have been Assets: Cash in SALN 37 million, Liabilities in SALN 34 million.

5. He showed he had balls. No one can turn his back on the Senate President and the impeachment court. Everyone cowers in fear. But, the CJ did it. Am not sure though if he was ready for JPE's quick reply to lockdown the building and prevent his departure.

6. Tomorrow is another day. Like i said from the very beginning of all these posts, no one wants to convict an honest man. CJ still has tomorrow to pop up. We hope he does. Like everyone of the 90 million Pinoys who want Jessica Sanchez to win tomorrow, we want to know the truth and listen to his answers to the questions. But then on the other hand, we cannot be sure if the Senate President's threats are exactly what the Defense wants. Maybe the defense thinks its okay to have his testimony stricken out. Anyway, he had already said it and maybe, this will give enough reasons for their allies in the Senate to say.... aha! There is reasonable doubt. ACQUIT!

Seriously though, I hope his advisers do convince him to come back to the Senate and instead of a walk-out do a walk-in. The nation wants answers. Everyone is willing to give him a chance to speak out and sort it out.
------

Meanwhile, here are three comments from my three lawyer friends:

a) his red-scare tactic. accusing pnoy to be under the influence of ronald llamas and his comrades. dios me, uso pa ba yan?
b) his conditional waiver to open his accounts, etc. and his challenge to drilon.

Kaibigan ko ilang members of the defense team. one of them claims hindi nila alam kung ano yong opening statement ni cj, much less yong apparent walk out. Kudos to enrile. for all his 'sins', enrile might still find himself on the right side of history for his handling of the impeachment. magaling si manong johnny.

My 2 cents - CJ’s “opening statement” was primarily a communication strategy rather than a legal design. At the outset, however, it failed to achieve its desired result. Many people were not convinced. Worse, the walk out was a total disaster.

GMA had it coming...then went to ICU when cases were filed. Same with Corona.
mmm..ICU means Intentional Corona Undertaking???
--------

I don't hear much Corona speaking, but I find it weird that while most if not all lawyers want to speak in English most of the time when explaining a case, Corona spoke in Filipino, and reading, not doing an extermporaneous speech with notes. I thought of him before as a low caliber lawyer to become a SC Justice, much less a CJ, at least compared to many lawyers out there that I've heard. Listening to him yesterday confirmed my earlier impression.

Meanwhile, I just read that CJ Corona's physicians have advised him to stay at the ICU of Medical City in Ortigas for at least two days and hence, he cannot attend the impeachment trial today. Not heart attack yet but conditions can lead to it, according to his doctors.

I think a better solution for the CJ is simply to resign. Spare himself, his family, the rest of us citizens, from further complicated political debates.  This might be easier said than done, or easier if done than not doing it.
------------