Fat-Free Econ 10: Impeachment, the Senate and Rule of Law

This is my article last Thursday in TV5's news portal,
http://www.interaksyon.com/article/32759/fat-free-economics-impeachment-the-senate-and-rule-of-law
-------- 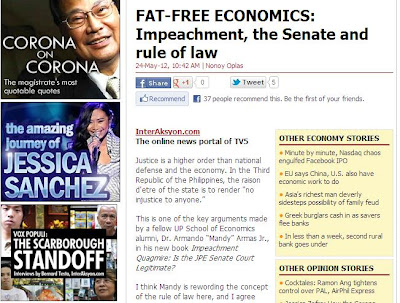 Justice is a higher order than national defense and the economy. In the Third Republic of the Philippines, the raison d'etre of the state is to render "no injustice to anyone.”

This is one of the key arguments made by a fellow UP School of Economics alumni, Dr. Armando “Mandy” Armas Jr., in his new book Impeachment Quagmire: Is the JPE Senate Court Legitimate?

I think Mandy is rewording the concept of the rule of law here, and I agree with his definition of the rationale for government existence: to cause no injustice to anyone, promulgate the rule of law, and by extension, protect private property rights and the citizen’s civil rights, such as freedom of expression, freedom from aggression.

An impeachment trial is mainly a political, not judicial, exercise. Once impeached by the House and convicted by the Senate, an official does not go to prison. He is simply removed from office. So the impeachment trial is only a vote whether the official can stay or not in their job; in the present case, as Chief Justice of the Supreme Court.

To bring an impeached, then convicted, official to prison, one has to bring the case to a regular court and go through the regular judicial processes like presenting various evidence to prove that the impeached official has violated certain criminal laws.

Here the judge is not an elected official who gets their mandate through political popularity, but someone who has been appointed by virtue of their knowledge of the laws and the Constitution, and their supposed impartiality from political pressures and biases.

So have the judge-senators acted with tyranny? No, or not yet, as the trial is ongoing.

This impeachment trial has wide economic consequences. Many business cases - or criminal cases with business implications - are decided with finality at the Supreme Court. If the people have trust in the objectiveness and impartiality of the High Tribunal, especially of the Chief Justice, then they will obey its decision with little or zero objection. And society and businesses can go on with little instability and uncertainty.

But if the people have little or no trust in the Supreme Court, then actors and players endlessly question its decisions, eroding society and the economy.

Economic transactions are anchored on trust. A person buys a vehicle from a motor shop at a particular price on the assumption that what are stated as the vehicle’s capacity and properties are true. If after the sale, the vehicle easily breaks down, trust is broken and the client will directly complain to the seller. If the response is unfavorable, the client can go to court to get proper compensation.

If the courts - from the lower to the higher courts - are perceived to be corrupt and impartial, some people may resort to non-judicial processes to get even, like property sabotage of the motor shop, or even inflict physical harm on the shop owner and its officers. And this will create another round of economic uncertainties from the micro to the macro levels.

While the impeachment trial is sometimes billed as a trial for good governance, there is reason to consider that this is also a big fight between the leaders of two branches of a “big” government, the President and the Chief Justice, respectively.

There is too much political and economic power in the hands of the government and its three branches - the power to impose and implement various regulations, prohibitions and taxation in the lives of the people. It is that big power, and the discretionary power whether to fully apply or exempt certain laws on certain people, that attract many of the shrewdest, the most clever among us to be in government, in any or all of the three branches.

The Senate as a political and not judicial institution - and the senators as elected not appointed officials - have a big stake in promulgating the rule of law and ensuring economic stability in the country.

A society and government that promulgates the rule of law will deter the shrewd and opportunistic from joining the government. Or deter the good guys there from becoming bad guys later. This is because of a greater certainty of discovery of a crime and punishment of the violators.

If existing institutions are doing their job well, then there is no need to keep expanding the government. We will ultimately have a lean, minimal and trustworthy government. A government that expands, not restricts, individual freedom; and a government that gives more personal responsibility to people in running their lives.
--------