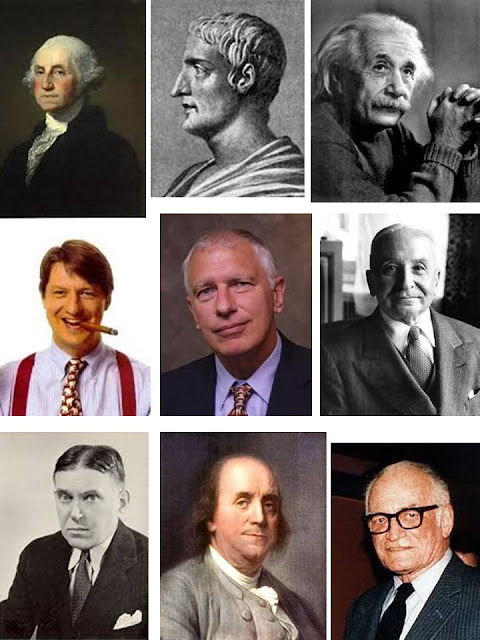 "We hang the petty thieves and appoint the great ones to public office." - Aesop

"Government is not reason; it is not eloquent; it is force. Like fire, it is a dangerous servant and a fearful master." - George Washington

“It is well enough that people of the nation do not understand our banking and monetary system, for if they did, I believe there would be a revolution before tomorrow morning.” - Henry Ford

"The more numerous the laws, the more corrupt the society." - Tacitus

"Never do anything against conscience even if the State demands it." - Albert Einstein

"The financial policy of the welfare state requires that there be no way for the owners of wealth to protect themselves." - Alan Greenspan (or as I like to dub "Greenscam"

"If you scratch a cynic, you'll find a disappointed idealist." - George Carlin

"Foreign aid might be defined as a transfer of money from poor people in rich countries to rich people in poor countries." - Doug Casey
------

"A little government and a little luck are necessary in life, but only a fool trusts either of them: -- P. J. O'Rourke.

"Despots and democratic majorities are drunk with power. They must reluctantly admit that they are subject to the laws of nature. But they reject the very notion of economic law . . . economic history is a long record of government policies that failed because they were designed with a bold disregard for the laws of economics" -- Ludwig von Mises.

"Let no man be sorry he has done good because others have done evil. If a man has acted right he has done well, though alone. If wrong, the sanction of all mankind will not justify him" -- Henry Fielding, English novelist (1707-1754).

"The typical lawmaker of today is a man wholly devoid of principle—a mere counter in a grotesque and knavish game. If the right pressure could be applied to him, he would be cheerfully in favor of polygamy, astrology or cannibalism.

It is the aim of the Bill of Rights, if it has any remaining aim at all, to curb such prehensile gentry. Its function is to set a limitation upon their power to harry and oppress us to their own private profit" -- H. L. Mencken, 1930.

"I am for doing good to the poor, but I differ in opinion of the means. I think the best way of doing good to the poor is not making them easy in poverty, but leading or driving them out of it. In my youth I travelled much, and I observed in different countries that the more public provisions were made for the poor, the less they provided for themselves, and of course became poorer. And, on the contrary, the less was done for them, the more they did for themselves, and became richer" -- Benjamin Franklin, 1766.

"I have little interest in streamlining government or in making it more efficient, for I mean to reduce its size. I do not undertake to promote welfare, for I propose to extend freedom. My aim is not to pass laws, but to repeal them....And if I should later be attacked for neglecting my constituents' "interests," I shall reply that I was informed that their main interest is liberty and that in that cause I am doing the very best I can" -- Barry Goldwater.

John Dryden's words, "Better to shun the bait than struggle in the snare" would have saved Americans a boatload of grief if followed in the early stages of our costly, demoralizing and unsustainable welfare state.

Call it what you want—capitalism, free enterprise, laissez faire or whatever—but a system that upholds property rights and otherwise allows free people to be themselves is remarkable precisely because it’s NOT a "system" per se. No deluded, pretentious planners devise or direct it. It’s no Rube Goldberg contraption of mandates and decrees. It’s simply what happens when you leave peaceful people alone. They produce more and satisfy human wants to a far greater extent than empty nanny-state promises could ever hope to deliver. -- Lawrence Reed.
------