It's over for the Chief Justice of the Supreme Court of the Philippines, Renato Corona. The impeachment move by the House of Representatives last December has been affirmed by the Senate yesterday in a 20-3 vote in favor of conviction.

In a number of facebook discourses among my friends, I advanced the position that the term "betrayal of public trust" by the CJ may not be appropriate and not correct after all. Some people, me included, never trusted the CJ (and many other high government officials) in the first place. So there was no betrayal of my trust, of our trust. Rather, there was only confirmation of my distrust, of public distrust, of the CJ.

While I have been following recently the impeachment trial, I have no hope or illusion that a conviction or acquittal of the CJ will result in the shrinking of government powers and expand individual freedom. What I only wished is that the Senate judgment will result in more transparency in government and hence, in less abuses, robbery and wastes in government. Of course between choosing conviction or acquittal, I wished that the CJ would be convicted, and I was not disappointed. I have observed from various sources how the shady character of the CJ would result in more rule of men, not more rule of law, culture in this country. 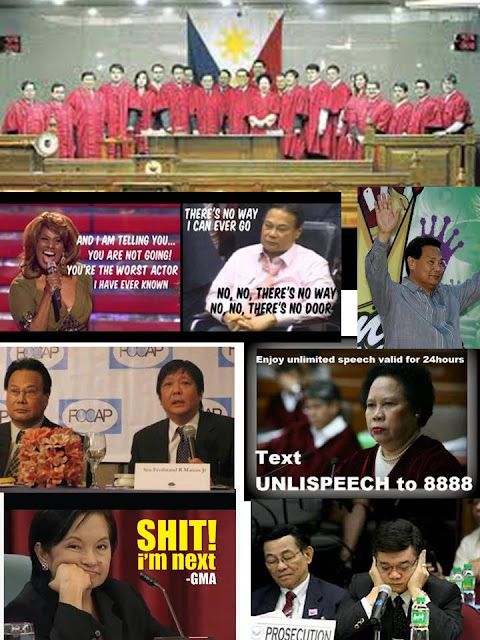 On the thesis that no major changes in government policy towards shrinking its powers over the individuals and ordinary citizens, I like this (second to the last) concluding paragraph on Public Choice theory by William F. Shughart II:


One key conclusion of public choice is that changing the identities of the people who hold public office will not produce major changes in policy outcomes. Electing better people will not, by itself, lead to much better government. Adopting the assumption that all individuals, be they voters, politicians, or bureaucrats, are motivated more by self-interest than by public interest evokes a Madisonian perspective on the problems of democratic governance. Like that founding father of the American constitutional republic, public choice recognizes that men are not angels and focuses on the importance of the institutional rules under which people pursue their own objectives. “In framing a government which is to be administered by men over men, the great difficulty lies in this: you must first enable the government to control the governed; and in the next place oblige it to control itself” (Federalist, no. 51).

I hope that the next CJ of the highest court will have a deep appreciation of the dangers of BIG government and big powers that are currently on its hands, and more powers being invented and concocted to further regulate, restrict and prohibit more  actions by individuals unless there are explicit permits and registrations from the government
---------