This is my article today in the online magazine,
http://www.thelobbyist.biz/perspectives/less-gorvernment/1305-labor-rights-and-employee-forever.
Below the article is a long comment from a friend, Arcy Garcia, a former buddy in BISIG in the late 80s when I was still a socialist. Then my short reply to him.
----------- 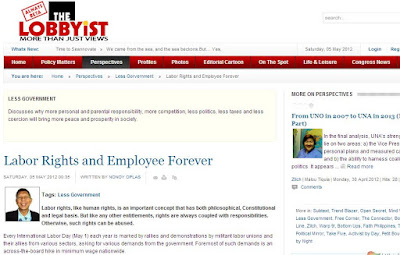 Labor rights, like human rights, is an important concept that has both philosophical, Constitutional and legal basis. But like any other entitlements, rights are always coupled with responsibilities. Otherwise, such rights can be abused.

Every International Labor Day (May 1) each year is marked by rallies and demonstrations by militant labor unions and their allies from various sectors, asking for various demands from the government. Foremost of such demands is an across-the-board hike in minimum wage nationwide.

Militant workers’ groups though argue that not all workers are organized and have a labor union to represent them in collective bargaining with management. Or they may have one but they are not skilled or trained enough to negotiate fairly with management, so they keep receiving low salaries. Thus, they want the government – via Congress or the Department of Labor -- to issue a law or Administrative Order that will force and coerce private enterprises to raise the minimum wage to a level that is demanded by the militant labor groups. In addition, the articulate labor leaders also want government to mandate and coerce the private employers to give various new or higher allowances and mandatory contributions for the social security of the workers.

These labor groups want rigid labor laws, or inflexible multiple laws that attempt to protect workers against possible "capitalist exploitation". Since workers do not own the means of production but only their labor and talent, and given the difficulty of workers to find a new or alternative job, then they are subject to capitalist exploitation and must be protected by the state.

Among the rigid labor laws that are generally applied in many countries are:

(a) High minimum wage, even the most unskilled workers should receive this salary.
(b) Security of tenure, protection from arbitrary dismissal and lay-off, even if some employees are displaying inefficiency or laziness and declining productivity, or even if the company is losing money.
(c) Long mandatory leaves with pay (vacation leave, maternity leave, sick leave, etc.); private health insurance on top of government-run health insurance.
(d) Higher employers’ contribution on certain government-owned corporations and financial institutions (SSS, PhilHealth, Pag-IBIG, etc.).
(e) High separation pay and retirement benefits, and so on.

In short, a policy of "expensive to hire and retire, difficult to fire."

These are indeed important and wonderful protection of workers. But those who have no jobs, or those who work in the informal sector, are not covered by these rigid labor laws.

A common result of this situation is high unemployment and underemployment rates. There are several alternatives for some employers, among them:

1. Instead of hiring five workers, a company would just hire one, two or three people, train and equip them so they can do the work of five people.

2. Hire some people on contractual or temporary, short-term (say five months) basis, just a month or few weeks before a period of mandatory regularization of workers. Or hire trainees and part-time students.

3. A company will close its office in a particular city and move to another city, or another country, where the cost of production and labor is lower, all other things being equal.

4. Use robots and machines for certain tasks that were previously done by people.

Many people do not consider this as result of rigid labor laws, but as additional reason to make the laws become even more rigid and more "pro-labor". That is, since unemployment is already high, the more that the government should protect workers from being laid off.

Another impact of "expensive to hire, difficult to fire" policy is that many employees are encouraged to become "employee forever" as their entrepreneurial spirit is discouraged. If the laws are stacked against being an entrepreneur and job creator, and in favor of employees and job seekers, why aspire to be an employer? Why not become an employee forever, get promoted to senior levels and enjoy the benefits of various "pro-labor" policies.

Better yet, become a politician or appointed government bureaucrat, and be the regulator of those businessmen, give them a hard time everything they seek business permit application or renewal, possibly extort some money or personal favour from them before they give their signatures and permission as regulators.

As of the latest labor force survey in the Philippines, January 2012, some 2.9 million Filipinos have no jobs, plus 7.0 million of those who have work are looking for additional work (the “underemployed”), mainly to augment their low income. Meaning almost 10 million Filipinos are either unemployed or underemployed, this is a big number.

Strictly speaking, employment is not a right. It is a privilege. Only those who have some ambition, are willing to endure some hard work, and continue to learn new skills, will be able to find work or be able to employ themselves, mainly as micro- or small entrepreneurs. There are those who do not want to work, or some work little then complain a lot, they later resign or are fired from work. Thus, employment is a privilege, it is not an entitlement or a right.

It is important therefore, for the government, national and local, to liberalize, not choke, the labor environment so that more private entrepreneurship and job creation will be encouraged. While it is desirable to get a high-paying and secure jobs, such may not be easily available, while "low-paying", unsecured jobs may not be glamorous but are easy to find.

The “easy to hire, easy to fire” policy may look heartless, but sometimes it is better in encouraging job creation than the “difficult to hire, difficult to fire” policy. If entrepreneurs will have a hard time firing their lazy and unskilled workers, they would rather hire very few people only and leave many job-seekers to remain unemployed. In a competitive business environment, employers will be forced to give good pay and various benefits to their efficient and hard-working employees so that the latter will not leave them to work in other companies or to become start-up entrepreneurs themselves. And those employees who would otherwise are lazy, will be forced to do their work well so that they will not be fired easily.

Labor laws that workers demand to protect themselves from "capitalist exploitation" will be the same laws that will prevent them and their children from being easily hired someday, or will hound and prevent them to become start up entrepreneurs and job creators someday.

A reaction from a friend, Arcy Garcia: