Last Thursday, May 10, after attending the meeting of the Congressional Oversight Committee on RA 9502, I went to the office of Sen. Pia Cayetano and gave this letter.
---------

We would like to submit our position paper on SB 5 of Sen. Loren Legarda and SB 2960 of Sen. Manny Villar, creating the Drug Price Regulatory Board, Amending RA 9502. 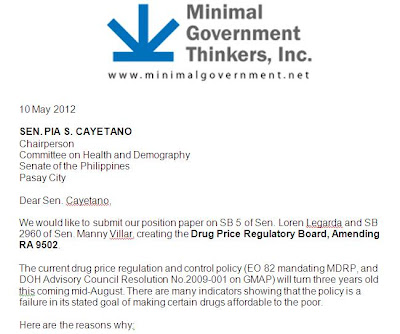 The current drug price regulation and control policy (EO 82 mandating MDRP, and DOH Advisory Council Resolution No.2009-001 on GMAP) will turn three years old this coming mid-August. There are many indicators showing that the policy is a failure in its stated goal of making certain drugs affordable to the poor.

Here are the reasons why:

1. The policy contradicted, if not defeated, the goals of RA 6675, the “Generics Act of 1988”. That law was successful in promoting cheaper generics, off-patent drugs to the public. The drug price control policy however, encouraged people to shift back to the branded and innovator drugs made by multinational pharmaceutical companies as they have been coerced by the government to slash prices by 50 percent.

2. The policy benefited the rich and upper middle class who would be buying those drugs whether their price remained at prevailing or discounted levels. Many if not all of the 22 drug molecules that were covered by the policy have cheaper, off-patent competing drugs already available. The poor were patronizing the off-patent drugs, which are still cheaper than branded drugs even if their prices were slashed by half.

3. The policy has adversely affected many local generic manufacturers. If they were selling their drug at P8 per tablet vs. the multinationals’ P15, the locals would make enough profit as the poor will patronize their products because of the big price differential. After the price control, the P15 becomes P7.50 and the local generic manufacturers now have the “more expensive” drugs. If they have enough leeway to further bring down their price to only P4 or lower without sacrificing the quality and safety of their drugs, fine.

But if they do not have enough leeway, then they will be forced to pull out their drugs rather than sell at a loss. Or worse, simply close down if the affected drugs are the main products of that generic manufacturer.

4. The policy has introduced business uncertainty. Companies with really innovative, and revolutionary products like more disease-killer drugs might hesitate bringing their products to the Philippines knowing that the politics of envy can hit them anytime.

5. Price control simply means price dictatorship. The government is dictating to the industry regardless of the cost of production and marketing, the cost of taxes and fees. Those companies must sell their products at a level that was set and dictated by the government. Otherwise, they will be penalized.

6. The policy did not recognize that government taxation of medicines - three- to five percent import tax, plus 12 percent value-added tax and local government taxes - is partly to blame for expansive medicine prices.

7. Competition among more drug manufacturers, drug retailers and pharmacies is the best price regulator, not more government regulation and coercion.

In this regard, the creation of the Drug Price Regulation/Regulatory Board (DPRB) is also wrong for at least two reasons:

1. It will add another layer of bureaucracy in the government, which will require another set of budgetary allocation each year. With a P300 billion annual budget deficit, the government should think of how to reduce spending and eradicate the need for more borrowings.

2. The DOH Advisory Council on Price Regulation, the body that deliberated the implementation and monitoring of the price control since mid-August 2009, has been transformed into the Advisory Council for Healthcare because there is general recognition by the Council members, including the federation of local generic manufacturers, the Philippine Chamber of Pharmaceutical Industry (PCPI), that price control or regulation is not the answer.

The Advisory Council is not a permanent body. Thus it is easy to transform itself and focus its discussions and energy on more important issues like universal healthcare, not just drug pricing. A permanent drug regulation body will only become a white elephant implementing and monitoring a bad policy.

In conclusion, government should encourage more competition from more players, both innovator and generic manufacturers, and refrain from regulating the pricing of those players. Congress should also amend the Internal Revenue Code to remove the various taxes on medicines.

We hope you will consider our observations. Thank you very much.

I did not mention in my letter yet the danger of the proposed DPRB can be hijacked by corrupt and extortionist officials. As I noted in my article  Fat-Free Econ 9: Drug Pricing Bureaucracy is Not Cool below,


One danger of having a new government bureaucracy that has the power to slap price control on any medicine and vaccine... is that it can be a big tool for corruption and extortion. A corrupt price control bureaucrat for instance can intimidate or harass any pharmaceutical company to pay a huge amount, otherwise their most popular, most saleable drugs will be slapped with a steep tax or voluminous paperwork, thus leading to heavy losses.

That board, like all regulatory agencies in the government, national and local, which has the power to say Yes or No to anyone trying to introduce new products and services, can be a magnet for scumbugs and bad elements in society. That is why it is not good to create more regulatory agencies when existing ones are plentiful already.