Welfarism 20: Hollande and Socialism in France

I am not a fan of outgoing France President Nicolas Sarkozy. But the entry of the new President who defeated Mr. Sarkozy yesterday, Francois Hollande of the Socialist Party and will implement socialist policies (bigger government, more subsidies, higher taxes, etc.), is something that I won't support either. Thank God I'm not in France. Below, some photos of Mr. Hollande and his supporters. 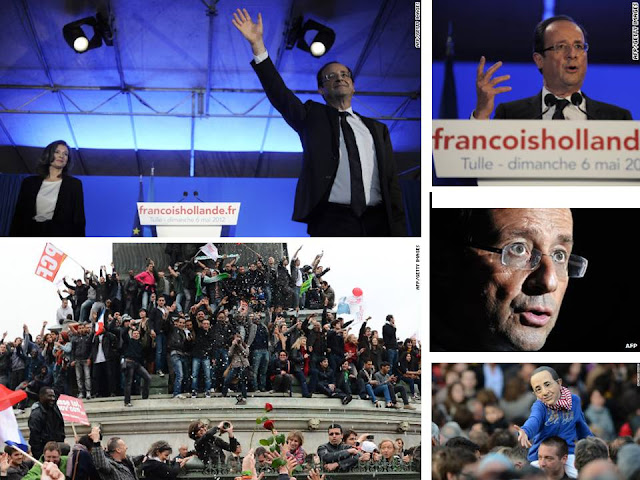 Mr. Hollande suggested during the campaign that he intends to raise the top marginal income tax to 75 percent. Get that? Being rich in France can be a bad achievement, so the government will confiscate 3/4 of a person's income if it reaches 1 million Euro a year or higher. The rich should be indebted to the government, so they must surrender more of their income to the government.

Can one also say that those whose businesses went bankrupt, and those who cannot find any stable job, can also credit the government for their situation? If one hears a lot about "market failure" but never "government failure", then only the above formulation will hold while the latter won't.

And many people are still enamored with socialism and socialist policies. Witness how former IMF head Dominic Strauss Kahn (DSK) also of the Socialist Party, was also front runner in fighting Sarkozy then before the rape scandal in the US hit him. Note that -- the IMF itself was headed by a socialist, wow. And many people think that the IMF, along with the WB and other foreign aid/multilateral bodies, are "advocating free market" policies. This is wrong of course, but I digress.

As a non-European observer, let us wait for things to unfold, in Europe in general and in France in particular. Meanwhile, here are some news reports I read today on the subject.

...He may come across as a moderate but Mr Hollande chose to fight his campaign on some hard-hitting economic policies, with proposals for a 75% top rate of tax and the recruitment of 60,000 new teachers. He has also vowed to renegotiate the EU's fiscal growth pact, signed by President Sarkozy.

The idea of a 75% income tax rate for earnings above 1m euros (£820,000; $1.3m) appeared to take his colleagues by surprise and was widely condemned by his rivals. The head of Mr Sarkozy's UMP party, Jean-Francois Cope, labelled his proposal for thousands of extra teachers as "crazy"....

...Mr. Hollande has said that he intends to give “a new direction to Europe,” demanding that a European Union treaty limiting debt be expanded to include measures to produce economic growth. Domestically, he has promised to raise taxes on big corporations and raise the tax rate to 75 percent for those earning more than one million euros a year....

Domestically, Mr. Hollande said he would raise taxes in a drive to balance the budget by 2017. He has vowed to raise the minimum wage, hire 60,000 more teachers over five years and lower the retirement age from 62 to 60 for manual workers who started their work as teenagers....


Hollande's message, that the German insistence on austerity must be tempered with plans to stimulate economic growth, helped propel him to a decisive win Sunday over incumbent PresidentNicolas Sarkozy,...

But analysts say that Hollande, who favors higher taxation and growth through stimulus spending, actually has little room to maneuver and will need to act fast to placate the financial markets that see him as a threat to Europe's effort to rein in its high levels of public debt....