I saw this chart in a facebook wall of one of my friends there. Interesting data on joblessness among some European youth, data as of yesterday, May 04, 2012. 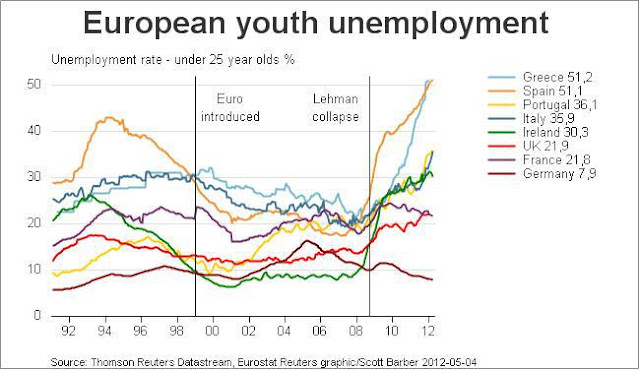 The PIIGS (Portugal, Italy, Ireland, Greece and Spain), especially G and S, are leading the way. More than half of Greek and Spanish youth in the labor force do not have a job.

One, those who have work are terribly taxed so that the government will have more resources to finance such huge unemployment allowance, plus the salaries and other benefits of government personnel and politicians doing such massive income redistribution.

Two, huge waste in human resources of an economy as these youth are not exactly "unskilled" or a "burden" to society. If a set up can be arranged so that only the lazy, those who have zero ambition in life, will have no work, then many of these youth can have jobs and productively contribute to society. Getting unemployment allowance from the government, assuming there is enough fund to do this, is not exactly a glamorous way to live, and I doubt that many young people would wish that kind of life. Majority of them would want to be productive, to be hired somehow so that they can show their talent and industriousness.

Here's another set of data that I got from the IMF's World Economic Outlook, April 2012. But this refers to overall unemployment for all ages, not just the youth. 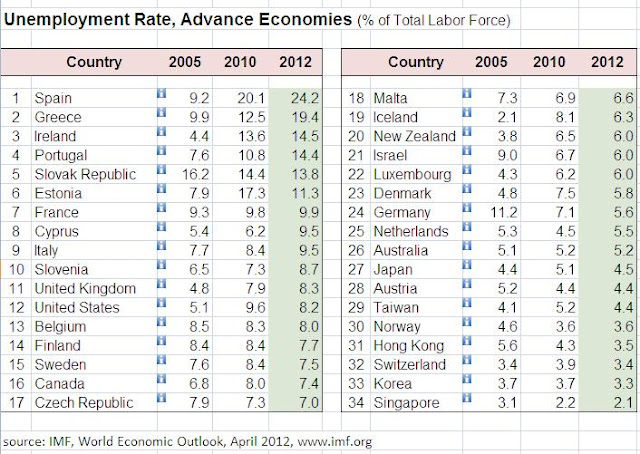 One explanation would be that entrepreneurship and business regulations in these Asian economies are not as strict and rigid as those in Europe and N. America.

For many Asian emerging economies, unemployment rate is mild. Pakistan and the Philippines are more of "outliers". 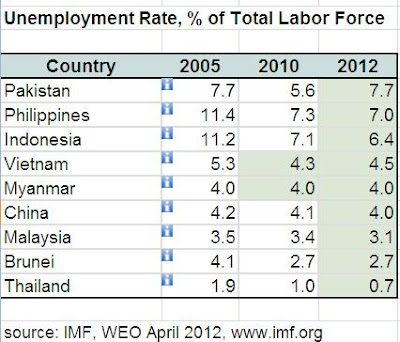 High unemployment rate means the demand for labor (by employers) is a lot smaller than the supply of labor, all other things being equal. It is possible that employers have high demand for workers but people want their salaries and benefits to be higher than what the employers would offer. So some people would prefer to be jobless -- and get some subsidies from the government or family members -- than have a work.

But as I noted in an earlier article, Labor Econ 6: Labor Rights and Employee Forever, May 05, 2012, if labor laws are many and too rigid, employers would rather hire few people.
Posted by Bienvenido Oplas Jr at 6:31 AM

I asked this question to a Dutch friend of mine. She said, it's hard to fire workers in the Netherlands & elsewhere in Europe. On top of that are the high cost of employment benefits that add up to the cost of production. Ergo, employers are hesitant to hire, because it's hard to fire.