This is my article yesterday in the online magazine,
http://www.thelobbyist.biz/perspectives/less-gorvernment/1312-federalism-government-debt-civil-society-and-the-private-sectors. 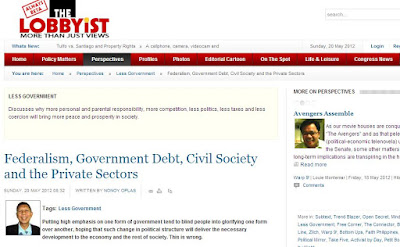 Putting high emphasis on one form of government tend to blind people into glorifying one form over another, hoping that such change in political structure will deliver the necessary development to the economy and the rest of society. This is wrong.

The form of government – presidential vs. parliamentary, federalism vs. unitary, centralization vs. decentralization, and so on – only gives different flesh and structures to the type of coercion that the state has over the individuals. This is because government, by nature, is coercion. And coercion takes various forms – regulations, restrictions, prohibitions, taxation, mandatory fees and contributions. There is a reverse side – subsidies, welfare, expansion of government size and bureaucracy. But the latter is made possible only by the taxation and mandatory fees and contribution that the government imposes on the people, especially the industrious and productive sectors of society. 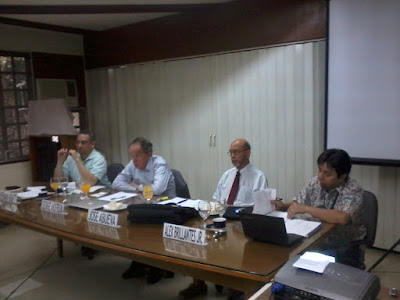 I attended a round table discussion last Friday “Federalism and Autonomy: Exploring Political Structural Solutions to the Mindanao Conflict” at the UP Third World Studies Center, Diliman campus. The main speaker was Dr. George Anderson of the UN Mediation Support Unit and a former Deputy Minister for Intergovernmental (1996-2002) and of Natural Resources Canada (2002-06). He also wrote several books on federalism.

The panel of reactors were distinguished academics, like former UP President, Dr. Jose Abueva, Prof. Emeritus of Political Science and Public Administration at the UP National College of Public Administration and Governance (NCPAG), and Dr. Alex Brillantes, Prof. and former Dean of UP NCPAG. The moderator was Prof. Herman Kraft of the UP Political Science Department.

I came late to the seminar and was not able to see Dr. Anderson’s presentation, but I was able to catch the main arguments during the reactors’ time and the open forum. 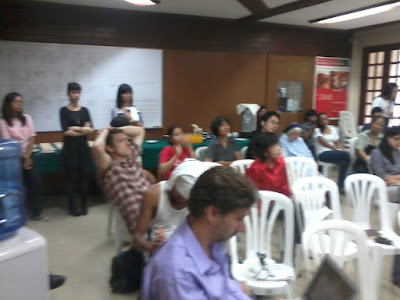 During the open forum, I argued my skepticism or indifference on one form of government over another as I think that governments, in most cases, are institutions of waste. The high public debt of many governments now, both poor and industrialized, is one clear example of such wastefulness. Because public debt is nothing but an accumulation of wastes and inefficiencies by governments. If projects and various welfare programs were indeed spent productively, then the subsidized public and bureaucracies would have become productive enough to pay those past debts, but this did not happen.

See table below. I did not mention these data as I only created this table while writing this article, and it should help illustrate my points above. 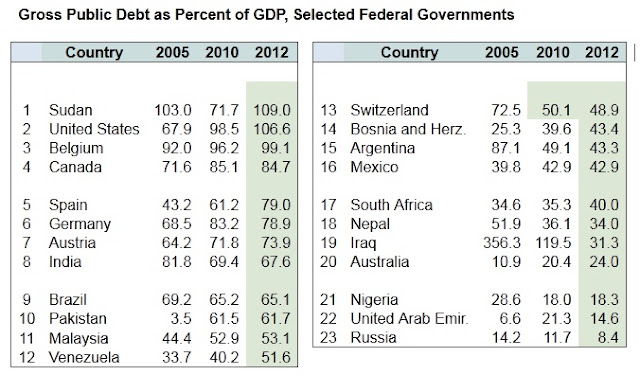 I also mentioned in my comment during the open forum that what many ordinary people would refer to as decentralization does not necessarily mean assignment of functions from the central or national government to the local and state governments. Rather, they mean transfer of functions to non-government bodies like civil society organizations and the business sectors.

For instance, maintenance of peace and order now in the shops, malls, banks, residential/office buildings, universities, etc is done more by the private security agencies, not by the police and other government forces. The body that builds more cost-effective housing for the poor is not the National Housing Authority or other government agencies but Gawad Kalinga, an NGO.

So instead of expanding government at the national or local level, it would help if government should step back in certain sectors, and give more space for civil society and the private sector to do development work in society.

Dr. Anderson and Dr. Abueva obviously did not favor my suggestion as they said that there is a big role for government to develop society, we only need to make it more efficient and more accountable to the people. Dr. Anderson added that at Philippine government spending of about 14 percent of GDP is definitely not “big” compared to many developed governments like Canada and continental Europe where public spending is 40 percent of GDP or higher. He has a point there because in those governments, even buses are owned by the government, here buses are entirely private and they compete with each other a lot. But we should not forget that the 14 or 17 percent of GDP Philippine government spending applies only to the national government. The local governments (provinces, cities and municipalities, barangays) have their own extra spending as they have extra sources of revenues, especially the rich city governments in Metro Manila and other highly urbanized cities in the provinces.

I believe that as citizens are becoming more empowered with more information, they become more educated and more innovative in finding private solutions to private problems, or civil society solutions to ordinary community issues and problems. The worsening debt turmoil in Europe, especially the PIIGS (Portugal, Italy, Ireland, Greece, Spain) that incidentally are all parliamentary governments, and the economic uncertainty they bring to the regional and global economy, is additional proof that free individuals should take more responsibility in running their own lives and that of their households and communities. Relying more on governments, federal or unitary or other forms, will only prolong the economic agony for all.
--------

These kind of post are always inspiring and I prefer to read quality content so I'm happy to find many good point here in the post. Writing is simply great! Thank you for the post.