Uhmmm, this is my first post on showbiz people and their public fights. I find the brawl at the NAIA Terminal 3 brawl yesterday funny. It involved a veteran journalist for many years, print and broadcast commentator Mon Tulfo, and showbiz couple Raymart Santiago and Claudine Barreto.

The stories and news reports are everywhere, one beauty of the internet. The video is also everywhere. Here are some still shots I copied from that video. Upper photos Raymart on the attack, lower photos Claudine nangabayo (hehehe) and the couple's friends doing their share. It's indeed a gang up on the 68 years old lolo Mon Tulfo. 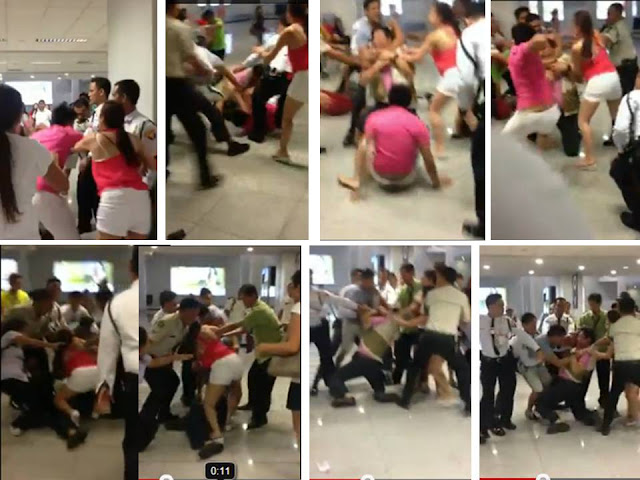 Raymart said that video, and these photos, were just "part 2" of an earlier altercation where Tulfo was the first to punch. Don't know how true this is.

Now here's the fun side. Filipinos making fun of Mon Tulfo himself. His key message in his print, radio and tv programs involving criminal cases (petty or serious) is: "Isumbong mo kay Tulfo" (Report it to Tulfo). The cartoon then asked after he was mauled, "To whom should I report?"

The next photo on the right, "Kanino kayo?" Or Whose side do you bet? Filipinos, really, are notorious for making fun of almost any event. 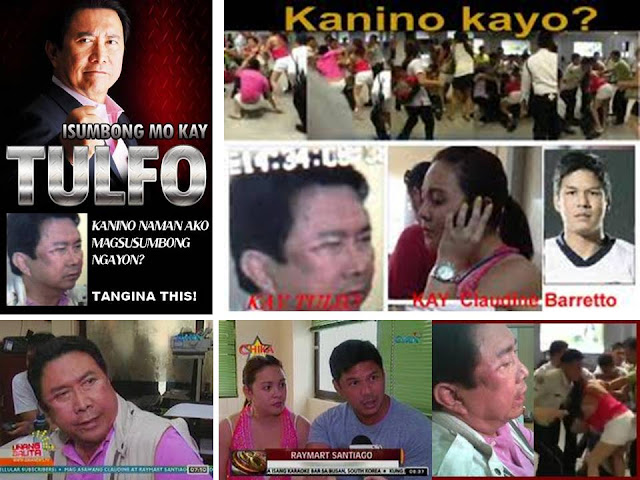 On a serious note though, here are my observations after seeing the video and reading some news reports.

1. Claudine Barreto's motormouth (or "bungangera", "palengkera") attitude caught other people's attention at the airport, including Mon Tulfo. The mistake was made at Boracay/Caticlan airport, not in Manila, so berating a staff at the Manila terminal is wrong. Cebu Pacific acknowledged mistake for offloading two of the luggage of the couple and their friends.

2. Mon Tulfo is justified in taking photos, or a video, of Claudine's verbal abuse (or attack) of the Cebu Pacific staff. He's a journalist, whether serious or sensational media, he needs some proof when he writes or says something.

3. Raymart is hot tempered. Assuming that his statement that it was Tulfo who shouted and punched first is true, the series of punches he hauled plus that of his buddies were OA. Tulfo is old, he does not deserve a volley of punches.

4. Security guards and police at the Terminal 3 did not control the fight early enough. And more than 24 hours after the incident, they should have released their report and finding of who really started the brawl, Tulfo or Raymart. It's possible that they are calculating or "massaging" their report or statement before they release it to concerned parties.

5. Cebu Pacific has been on the news frequently due to frequent flight delays, and offloading of passengers and/or their luggage even if they have come on time for their flight. Its inefficiency triggered the said fight.

More fun in the Philippines!

On another note, I have stopped flying Cebu Pacific since a year ago. My last flight with them was my Manila-Naga trip, May 2011. It took me about 1:25 hours standing just to check in. Then my flight was delayed. Going to Naga, and going back to Manila the next day.

So I advice my friend to find other airlines whenever possible. Besides, Cebu Pac and the Gokongweis are among the major financiers of climate liars and racketeers World Wildlife Fund (WWF).
Posted by Bienvenido Oplas Jr at 6:48 PM